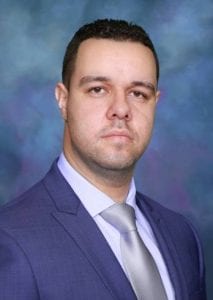 Tim Karkatselos was born in New York City, New York. Mr. Karkatselos earned a Bachelor of Arts degree in Political Science with a minor in Law and Justice from Eckerd College in St. Petersburg, Florida. He then went on to earn his Juris Doctor from St. Thomas University School of Law in Miami, Florida, graduating with honors. While in law school, Mr. Karkatselos was a member of the Moot Court Honor Board and served as an articles editor for the St. Thomas Journal of Complex Litigation.
Prior to joining DRBDC, Mr. Karkatselos worked as a prosecutor for the Miami-Dade State Attorney’s Office where he tried numerous cases and argued several motions, acquiring a vast amount of litigation experience.

Mr. Karkatselos was admitted to the Florida Bar in 2016.

This website uses cookies to improve your experience while you navigate through the website. Out of these, the cookies that are categorized as necessary are stored on your browser as they are essential for the working of basic functionalities of the website. We also use third-party cookies that help us analyze and understand how you use this website. These cookies will be stored in your browser only with your consent. You also have the option to opt-out of these cookies. But opting out of some of these cookies may affect your browsing experience.
Necessary Always Enabled
Necessary cookies are absolutely essential for the website to function properly. This category only includes cookies that ensures basic functionalities and security features of the website. These cookies do not store any personal information.
Non-necessary
Any cookies that may not be particularly necessary for the website to function and is used specifically to collect user personal data via analytics, ads, other embedded contents are termed as non-necessary cookies. It is mandatory to procure user consent prior to running these cookies on your website.
SAVE & ACCEPT